What is Phyllite – All You Need to Know About This Rock

The team at World of Stones USA has explained about many different types of rocks in the past. Today, by continuing the series, we are going to share all aspects of Phyllite rocks in a nutshell from a commercial point of view rather than the academic one.

Phyllite is a metamorphic rock with crinkled or wavy foliation. The word Phyllite originates from the Greek word “Phyllion,” which means leaf.

Now, we know what Phyllite is.  The next question arises: How is it formed in nature?

What is the protolith or parent rock type of Phyllite?

Shale, pelite, or slate are protolith or parents of phyllite rocks. So, like slate, Phyllite has a typical texture called “Phyllitic sheen” and has fissility or tendency to split into sheets like slate rocks.

What is the prime difference between phyllite and slate rocks from a geological point of view?

Slate has extremely fine Clay flakes in a preferred orientation.

Phyllite has fine-grained Mica flakes in a preferred orientation.

Schist has large flakes in a preferred orientation.

It means Phyllite is in between the gradation of a degree of metamorphism of slate to schist.

How Does Phyllite Form?

What are colors found in Phyllite?

What is the mineral composition of Phyllite?

Scielo.br has given the mineralogical composition of phyllites by the Rietveld Method.

According to the table above, we can say:

It is excellent as crushed stones used in constructing buildings, as the base material for paths, driveways, and roads. It is often used in landscaping, paving like patios and decks. We can use Phyllite wherever we can apply slate stones.

Shily appearance and a higher amount of quartz render the Phyllite a decorative stone. It can beautify your interior and exterior spaces like a façade when used smartly.

In landscaping, you can use phyllite aggregates as stunning elements in décor.

Where is Phyllite found?

Phyllite occurs across the world in many regions, such as:

World of Stones USA in Maryland has a big inventory of phyllite pavers to use in outdoor patio making in various surface textures to make it anti-skid.

You will have the best prices for the best and desired quality of phyllite stones at World of Stones USA. The Pros and Cons of Paver Patios That You Must Know 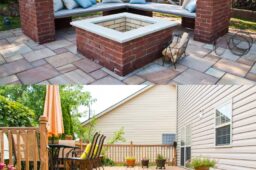 Natural Stone vs Wood Deck: Which Is the Best for Patio Area?